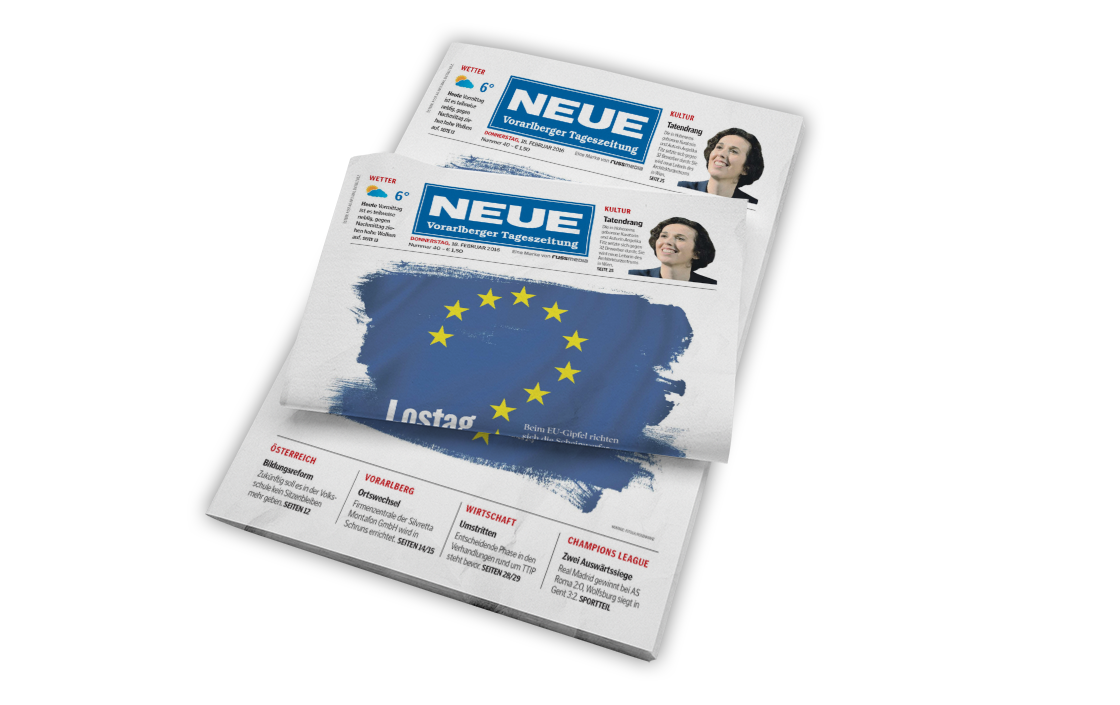 For over 50 years, NEUE Vorarlberger Tageszeitung has stood for independent journalism.

What we offer our readers:

NEUE is close to its readers, up-to-date and informative – and that from Tuesday to Sunday in a handy small format as well as digitally in the NEUE app.

The history of the NEUE Vorarlberger Tageszeitung:

The first edition of NEUE Vorarlberger Tageszeitung appears on May 2, 1972, originally founded as a competitor to the “Vorarlberger Nachrichten”, which dominates in Vorarlberg. In 1975, the Graz-based Styria publishing house joins NEUE, and an editorial cooperation with the Kleine Zeitung is established. At this time, NEUE also changes from the large to the more manageable small format.

The editorial cooperation of NEUE Vorarlberger Tageszeitung with the “Kleine Zeitung” still exists today. NEUE takes over national and international reporting from the editorial offices of the Kleine Zeitung. Local, sports and culture come exclusively from the NEUE editorial staff. Currently, 12 editors and a team of layouters and proofreaders work in the NEUE editorial department under the direction of Editor-in-Chief Moritz Moser.

In 1990, the later Russmedia, at that time still Vorarlberger Medienhaus, takes over NEUE Vorarlberger Tageszeitung, which results in further synergies. There is a change in the layout, and so NEUE appears for the first time on August 31, 1990 with the blue title head and as one of only a few daily newspapers worldwide from Tuesday to Sunday.

The NEUE ePaper has been available since December 2016. The digital edition is sent out on the eve of the publication date and can be read worldwide on a cell phone, tablet or laptop. The ability to enlarge articles and advertisements individually and the practical read-aloud function also make NEUE easily accessible in digital form for readers with visual impairments.

In May 2020, the news portal NEUE.AT is launched and since then informs readers always and everywhere about events in Vorarlberg, Austria and the world. The practical news ticker on NEUE.AT additionally provides up-to-the-minute information around the clock.
NEUE am Sonntag appears for the first time as an independent brand on September 9, 2007. As a Sunday newspaper, it offers even more exciting reading material and deals with many special topics such as cooking, travel, business, gardening and living. NEUE am Sonntag now counts as the Sunday newspaper with the widest reach in Vorarlberg.